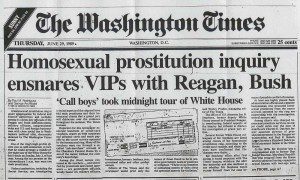 This week’s PID Radio goes through the looking glass as we connect some dots and discover a very disturbing picture.

Satanic ritual abuse is a controversial topic. But not only is ritual abuse a real phenomenon, we believe it is more widespread than most of us realize. What’s more–and more frightening–it appears that there is an ongoing, coordinated effort to use children, especially marginalized children from poor or broken homes, as sexual playthings for the wealthy and powerful.

We talked about the Johnny Gosch case, which was a central thread to tonight’s show. Johnny was abducted from Des Moines in 1982 at the age of 12, allegedly by a group working for a man named Lawrence King, owner of the Franklin Community Credit Union in Omaha, Nebraska. Johnny’s mother hasn’t seen him since–but he’s back in the news.

Earlier this year, it was revealed that a reporter for an Internet news site, Jeff Gannon, was actually James Guckert, a former male prostitute who had somehow managed to get security clearance to attend White House press briefings. Speculation began to circulate around the web that Gannon/Guckert was in fact the adult Johnny Gosch.

What’s especially disturbing about this case are the connections between Lawrence King, Boys Town, and power brokers in the Republican Party at the national level: One of the young men who testified in the Franklin Credit Union case was able to draw an accurate floor plan of the private living quarters inside the White House–where the public is never allowed.

In addition to the Franklin case, we discussed recent cases of satanic abuse of children in Louisiana, Ohio, the U.K.; the involvement of the CIA in abducting children for use as prostitutes (and possible mind control purposes); and the connection of the recent death of “gonzo journalist” Hunter S. Thompson, Johnny Gosch, and a “snuff film” that may have been recorded at the Bohemian Grove, an annual retreat near Sacramento, California popular with powerful conservative politicians.

Please take the time to check our sources in the show links. What’s being done to our children is dark and twisted, but it is definitely not limited to a few isolated cases of disturbed individuals.