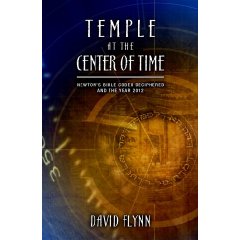 To whet your appetite for David Flynn’s mind-blowing new book, Temple At The Center Of Time: Newton’s Bible Codex Finally Deciphered and the Year 2012, we reach into the archives and present an interview with David first posted at PIDradio.com on July 31, 2005. David’s analysis of the 1947 UFO crash at Roswell, New Mexico gives you an idea of the mental acuity he brings to bear on the hidden messages encoded in the location of Solomon’s temple.

From the original show notes:

Our guest this week was David Flynn, a cryptoarchaeologist — someone who teases out the deeper meanings of anomalies that scientists can’t explain. What to make of the location of the crash on the 33rd parallel (33 degrees North), considering that “33” is a very important number to occultists? Is it just a coincidence?

There’s a whole lot more. And all the numbers seem to point to 2012, which is the year that ends the age according to the incredibly precise calendar developed by the ancient Mayans.

It was such a fascinating discussion that we didn’t even get to mention his book, Cydonia: The Secret Chronicles of Mars.

5 comments on “Best of P.I.D. Radio: David Flynn — The Occult Significance of the Roswell Crash”