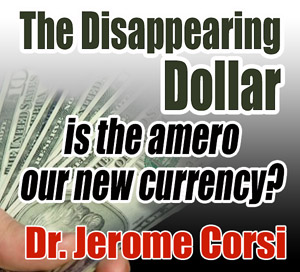 IN THE WAKE of the collapse of several of the largest investment banks in the U.S., Fannie Mae and Freddie Mac, and the world’s largest insurance company, it’s worth revisiting an interview we did with Dr. Jerome Corsi six months ago. The key question, which won’t be asked during the negotiations over the $700 billion bailout of the financial services industry, is whether this total system collapse really happened by accident.

No, says Dr. Corsi, this crash was deliberately engineered to destroy the economy in order to convince Americans that we need to become part of a North American Union to keep up with the new #1 economy in the world, the European Union.

Then comes the Transatlantic Economic Council, but we’ll get into that in another show.