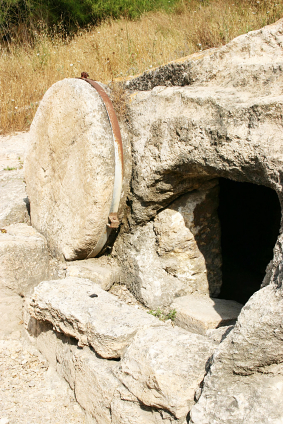 I am the living bread that came down from heaven. If anyone eats of this bread, he will live forever. And the bread that I will give for the life of the world is my flesh. — Jesus

Men of Israel, hear these words: Jesus of Nazareth, a man attested to you by God with mighty works and wonders and signs that God did through him in your midst, as you yourselves knowâ€”this Jesus, delivered up according to the definite plan and foreknowledge of God, you crucified and killed by the hands of lawless men. … Brothers, I may say to you with confidence about the patriarch David that he both died and was buried, and his tomb is with us to this day. Being therefore a prophet, and knowing that God had sworn with an oath to him that he would set one of his descendants on his throne, he foresaw and spoke about the resurrection of the Christ, that he was not abandoned to Hades, nor did his flesh see corruption. This Jesus God raised up, and of that we all are witnesses. …

Let all the house of Israel therefore know for certain that God has made him both Lord and Christ, this Jesus whom you crucified. — Peter

[I]f Christ has not been raised, your faith is futile and you are still in your sins. Then those also who have fallen asleep in Christ have perished. If in Christ we have hope in this life only, we are of all people most to be pitied. — Paul