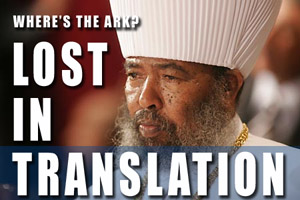 FRIDAY has come and gone in Rome, and there was no press conference today by Patriarch Abune Paulos to reveal the Ark of the Covenant, or about anything else for that matter. The hotel where the conference was supposed to take place says nothing was ever scheduled.

However, read the account of Philip and the Ethiopian eunuch in Acts chapter 8. Is it possible that the eunuch was on a diplomatic mission to Jerusalem to return the Ark to the Messiah? Interesting speculation.

Also, read the prophetic verses of Isaiah 18. Could this be a reference to the United States (“a nation, tall and smooth, …a people feared near and far, a nation mighty and conquering, whose land the rivers divide”) and the current infestation of locusts (“whirring wings”) in Ethiopia? We don’t know, but again, it’s interesting speculation.