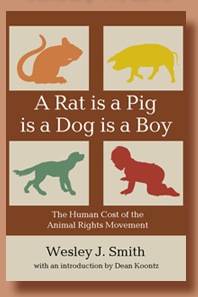 WE ARE pleased to talk again with award winning author Wesley J. Smith, a Senior Fellow in Human Rights and Bioethics at the Discovery Institute. He is also a consultant to the International Task Force on Euthanasia and Assisted Suicide, and a special consultant for the Center for Bioethics and Culture.

His book Forced Exit: Euthanasia, Assisted Suicide and the New Duty to Die (1997, Times Books), is now in its third edition published by Encounter Books. Smithâ€™s Culture of Death: The Assault on Medical Ethics in America, a warning about the dangers of the modern bioethics movement, was named one of the Ten Outstanding Books of the Year and Best Health Book of the Year for 2001 (Independent Publisher Book Awards).

Smithâ€™s most recently published book is Consumerâ€™s Guide to a Brave New World, in which he explores the morality, science, and business aspects of human cloning, stem cell research, and genetic engineering. His next book, a critical look at the animal rights/liberation movement, will be published in January, 2010 by Encounter Books.

Wesley’s blog, Secondhand Smoke, is essential reading if you want to stay informed about the ongoing bioethics debate in this strange new world of trans- and post-humanism.

We discussed the Obamacare proposals now winding through the U.S. Congress and the dangers posed by a system designed and controlled by bioethicists who deny that humans are unique among the species on planet Earth.