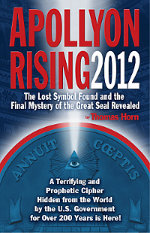 THE UNITED STATES were founded by esoteric societies to bring forth the resurrected Apollo. So says Tom Horn in his new book, Apollyon Rising 2012, a remarkable piece of research and analysis in which he makes the case that 18th century Freemasons knowingly established a New Atlantis to welcome the return of “Saturn’s reign, With a new breed of men sent down from heaven.”

What happens then? The birth — or rebirth — of a boy:

[I]n whom
The iron shall cease, the golden age arise. . .
[…]
He shall receive the life of gods, and see
Heroes with gods commingling, and himself
Be seen of them, and with his father’s worth

The poem cited above is by the Roman poet Virgil, and it is the source of the phrase Novus Ordo Seclorum, which is featured on the reverse of the Great Seal of the United States. As Saturn is one aspect of Satan/Lucifer, this prophesied boy — Apollo/Apollyon/Abaddon/Osiris/Marduk/Nimrod — is the son of Lucifer, and the hoped-for savior to lead mankind into a New Age.

Are we to believe that men as brilliant as Washington, Franklin, Adams, and Jefferson didn’t know about this?

Further, it appears that 19th century occultists were aware of the Mayan calendar, which ends on or about 12/21/12, and added those symbols inside the Capitol of the United States.

What does it all mean? We only scratch the surface during this hour-long discussion.