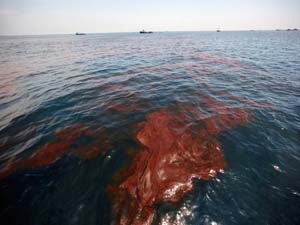 FROM OUR newly equipped “lair in the air”, we look out the window, observe and try to make sense of some of it.

The oil continues to flow from the shattered BP well in the Gulf of Mexico. The explosion, which killed 11 men on April 20, 2010 (Hitler’s birthday, coincidentally), has turned into an ecological disaster of near-biblical proportions. Speaking of which, experts warn that the big volcano on Iceland looks like it’s ready to blow.

Meanwhile, political forces inside the U.S. continue to jockey for power, and it’s very tempting for us Christians to respond in kind to the hate-filled attacks. That’s just what the enemy wants.

We note that the money supply in the U.S. contracted at a historic rate in the first quarter of the year. That means two things: more government stimulus, and more economic hard times ahead.

The Bilderberg Group gathers next week for its annual meeting. Economy and Iran are the two big topics, according the longtime Bilderberg observer Jim Tucker of American Free Press.

And the Anglican Church has issued a mildly worded rebuke to the Episcopal Church USA for consecrating another openly homosexual bishop. How far from the Bible can one drift and still be considered a Christian?