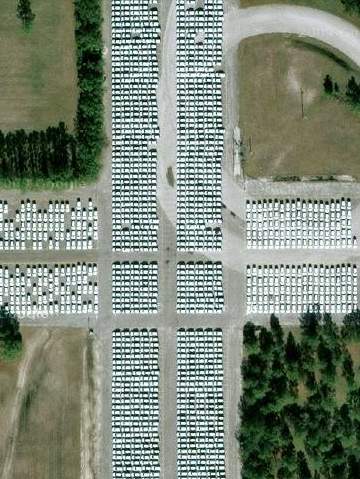 OR PERHAPS, “A Tale of Two Airports”.

Something weird is going on at the small airport Clay County, Florida (see picture at right). Why are hundreds of white vehicles parked on the tarmac? And why do those vehicles reportedly belong to Cerberus, the parent company of infamous government contractor Dyncorp (as well as Chrysler, GMAC, and a number of other corporations)?

Meanwhile, Bluecifer, the huge demonic stallion statue at the Denver International Airport gets a playmate–Anubis, the Egyptian god of the dead. Elsewhere, the Bilderberg Group meets in Spain; tough talk from Turkey raises specter of Gog/Magog war; and Dominionist elements appear in the Salvation Army.