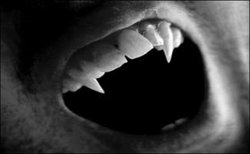 GOD IS clear on the subject of shedding human blood: Don’t. A quick search of the Bible reveals that blood has a spiritual aspect we don’t really understand.  God forbid spilling human blood; many of the Fallen, like Molech, demand it.

So why are so many Americans, from pre-teens to grandparents, fascinated with the mythical creature infamous for its bloodlust — the vampire? And why are so many Christian parents OK with their daughters’ obsession with the Twilight series?

We discuss the pop culture trend that’s transformed yesterday’s monsters into the trans/super/post-human anti-heroes of today.  It’s a phenomenon so powerful that at least one university sociologist calls it the emergence of a new, cult-like hyper-real religion.

Follow these links for more information about The Omega Hour Conference, Aug. 27-28 in Las Vegas and the West Coast Conference on the Paranormal.