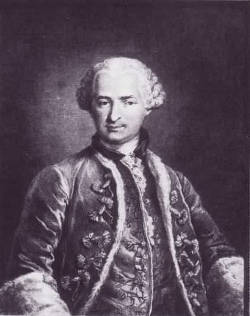 A MYSTERIOUS 18th century man who called himself the Count of Saint Germain provides the jumping off point tonight. Apparently this guy, who was an adventurer, alchemist, and diplomat, whose mysterious origin created a legend around him, has been a guiding light for such prominent occultists as Helena Blavatsky, Aleister Crowley, and Alice Bailey.  It’s claimed that Saint Germain has manifested throughout history as the high priest of Atlantis, Plato, the prophet Samuel, Joseph (the father of Jesus), Merlin, Christopher Columbus, and Francis Bacon.

Why do we care? Because New Agers today consider the Count of Saint Germain the “Maha Chohan”, the current leader (or “hierarch”) of the Great White Brotherhood, a group of “ascended masters” that have distributed religious teachings through select humans.  The Brotherhood, according to New Agers, includes Jesus.

It’s worth noting that New Agers believe that Saint Germain is the sponsor of the United States, and his recent channeled messages (signed “I AM THAT I AM”, a phrase that should be familiar to anyone who’s read the Bible) focus on the concept of “ascension” to a higher plane of being–and what should be done about those who are standing in the way.

Sadly, New Age concepts like contemplative prayer, which creates an altered state of consciousness and opens one to spirits–not all that different from channeling–are being promoted in evangelical megachurches and on Christian broadcasting networks.

Sharon and Derek will speak at the Supernatural Science and Prophecy Conference October 1 and 2 in Canton, Ohio. Other speakers include Tom Horn, Russ Dizdar, and Jeffrey Radt. For more information, see www.ControlledMinds.com.

The Revelations Radio Network has a new website! Take a look and give a listen to a great group of like-minded Christian podcasters.