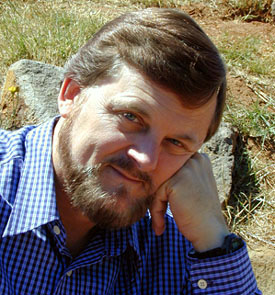 IN LIEU of our take on the news this week — we really don’t want to rehash the political conventions — we decided to bring back an interview from our first year on the web.

In the fall of 2005, in the middle of the most intense Atlantic hurricane season ever (Katrina, Rita, and Wilma are, as of this writing, three of the six most intense hurricanes recorded) and following a destructive earthquake in Pakistan that killed an estimated 75,000 people, we spoke with Stan Deyo, CEO of Halo Orbital Technologies.  His life story reads like a sci-fi thriller — except that readers might find the plot too “out there” even for fiction.

He’s also a computer programmer in seven languages, the author of two books and five scientific papers, a university lecturer in 3D computer animation and graphic art, and an amateur archeologist in the Middle East where he believes he’s found the location of the Garden of Eden. (We didn’t even get a chance to talk about that.)

Stan discussed his earthquake prediction maps, which are based on ocean temperature data provided by the U.S. Navy. He’s been accurate approaching 80 to 90 percent of the time, to the point that it appears the Navy is withholding information from Stan from time to time. We got his assessment of the killer quake in Pakistan.

He also talked about his work on anti-gravity, research that almost got him killed at the bottom of a mile-deep mine shaft in Australia. Stan says this technology is in use today, but not by any national government. Governments change, but the men and women who hold real power in this world pass it down from generation to generation and they have no national loyalties.

And we’ll mention again, in the public interest, that Stan does not recommend anti-gravity as a safe elementary school science project.