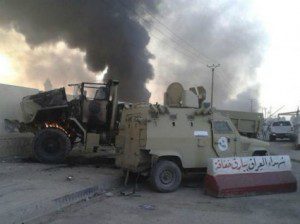 AN UGLY scenario is playing out in Iraq. An al-Qaeda linked group, the Islamic State in Iraq and Syria (ISIS), has essentially invaded Iraq from Syria and is on the verge of launching a battle for Baghdad. News reports from the region depict ISIS as a brutal terror organization, leaving a trail of beheaded bodies in its wake.

But until recently, we in the West were sending these guys money and weapons to help them fight against the government of Bashar al-Assad in Syria. What in the world is going on over there?

Derek and Sharon Gilbert will be at the Prophecy in the News Pikes Peak Prophecy Summit July 25-27, 2014 at the Marriott Hotel in Colorado Springs. Watch for information here.

Please visit the P.I.D. Radio Facebook page. Find links to the articles we discuss at P.I.D. News, discuss the topics at the P.I.D. Radio Cafe, and make time to listen to some of the great Christian podcasters at the Revelations Radio Network.