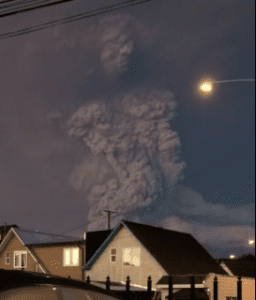 MOUNTAINS ARE shaking. A massive earthquake has left over 2,400 dead in Nepal, India, Bangladesh, and Tibet at last count, and that number will almost certainly grow in the hours ahead. Meanwhile, a volcano in Chile has unexpectedly erupted for the first time in 40 years, spewing a cloud of ash that’s reached southern Brazil.

What’s more, people spotted something that looked like a giant in the cloud and some locals are convinced that it was a manifestation of the god of the volcano.

This isn’t surprising. Mountains and volcanoes have been considered the abode of gods since the dawn of time. In fact, Eden was on “the holy mountain of God” (Ezekiel 28:13-14). And the climactic battle between the armies of heaven and the forces of Antichrist will be at Armageddon — har-mo’ed — the “mount of assembly” in the Holy Land, Mount Zion.