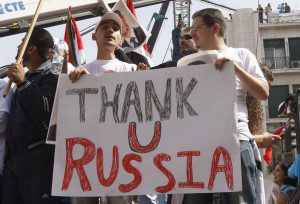 RUSSIA AND Iran have sent troops to a battle for Syria’s largest city, Aleppo. (So has Cuba, according to some reports.) There are a couple of implications to this battle, which began yesterday: Since Aleppo borders on the “Islamic State-free zone” proclaimed by Turkey and the U.S. last month, will the NATO allies have a problem when Russian tanks roll in?

More significantly, the IS-free zone (which is definitely not IS-free) includes Dabiq, the village where the Islamic State believes it will fight a climactic battle against the forces of Rome (Christendom) before they go on to establish the global caliphate. How will the IS respond?

Also: Mindfulness makes converts even in Christian churches, a recommendation for Annie Jacobsen’s history of DARPA (The Pentagon’s Brain), and scientists claim they can make Christians disbelieve in God — with magnets.

Visit the P.I.D. Radio Facebook page. Find links to the articles we discuss at P.I.D. News, and make time to listen to some of the great Christian podcasters at the Revelations Radio Network.