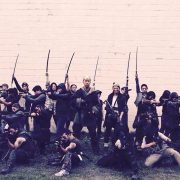 THERE IS never a dull week in the Middle East.  We learned that a draft report commissioned by the intelligence services of the United States recommends preparing for “a post-Israel… Read more »