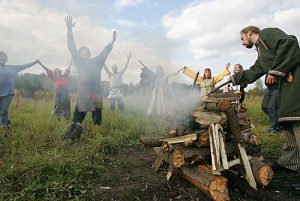 We’ve been very busy this Memorial Day weekend upgrading security here at The Bunker. (Actually, repairing our backyard fence which was damaged in a thunderstorm last summer.)

The topic we’d originally planned for this week requires more research, so we’re putting it off for another week. Trust us–next week’s show is a “don’t miss”, and it’s by far the most disturbing show we’ve done.

Instead, this week we feature Derek, guest hosting an hour on Saint Louis radio station KJSL (AM 630). The topic Derek focused on was God’s lament–and accusation–revealed to the prophet Hosea: “My people are destroyed for lack of knowledge.” Derek sees parallels between ancient Judah and modern America. What other conclusion can you draw when, according to pollster George Barna, barely more than half of the Protestant pastors in America today have a biblical worldview; 2/3 of Americans do not believe in the literal existence of Satan; and about 40% of Americans think Jesus sinned while on Earth and do not believe in His literal resurrection?

Again, make sure you listen to next week’s podcast. Disturbing, mind-bending, and way through the looking glass.