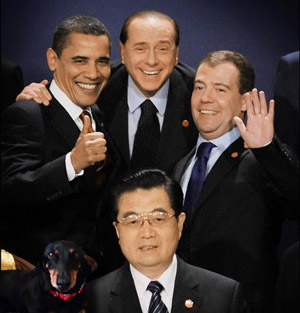 THE MEETING of the heads of state of the world’s largest economies last week, the G20 summit, provided its members a number of photo opportunities — and what one prominent economic writer calls a “revolution in the global financial order.”

World leaders, under cover of the current economic crisis, authorized the International Monetary Fund to create a de facto global currency called Special Drawing Rights. Watch what happens next: we predict that the U.N. will seek the power to tax the world, either by taxing carbon emissions, or through the International Seabed Authority, which — under powers granted through the Law of the Sea Treaty — would tax mineral related activities in the international seabed. (Secretary of State Hillary Clinton said that securing U.S. ratification of the treaty would be a priority for her.)

This should come as no surprise to Christians. The drive to restore the global empire of Nimrod has ever been the goal of globalists, and now we’re another step closer to Babel.

We also talked about this week’s rash of multiple murders. Already the meme is spreading: in a time of economic distress, gun ownership is dangerous.

Note that the author of this piece closes with this sentence: “What’s truly unsettling in America’s new era of gloom and dead ends is wondering how many of those 663,000 [newly unemployed] might be deeply, irrevocably angry about it â€” and might have a gun.”

Warning: this is disturbing.

Note: P.I.D. Radio is proud to be part of the Revelations Radio Network, a collection of like minded Internet broadcasters. Youâ€™ll find all the shows collected at www.RevelationsRadioNetwork.com.