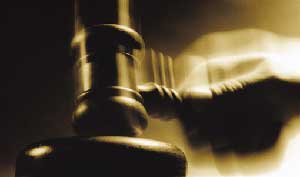 OF ALL the people in the major media, we really didn’t expect MSNBC’s Keith Olbermann to report this story, which was leaked to the New York Times and the Washington Post back on April 7. In short, the Obama administration has claimed the right to assassinate American citizens with no oversight or due process of any kind.

Glenn Greenwald of Salon.com spells it out:

Here again, we see one of the principal and longest-lasting effects of the Obama presidency: to put a pretty, eloquent, progressive face on […] indefinite detention, military commissions, “state secrets” used to block judicial review, an endless and always-expanding “War on Terror,” immunity for war criminals, rampant corporatism — and now unchecked presidential assassinations of American citizens…

Which is why we consider the Obama presidency the third term of George W. Bush.

Also: decapitation of Poland’s government; the Iceland volcano; Christians for Earth Day; Israel and Iran; Scuds for Hezbollah; human genes in cows and goats; and the Event Horizon in New York.

Derek is traveling to Nashville this week to serve as “servant of ceremonies” for The Last Days Conference April 23rd & 24th in Antioch, Tennessee. Speakers include: