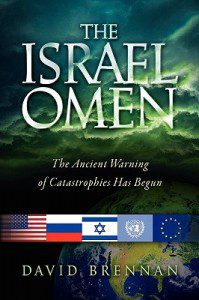 Since 1991, there have been thirteen documented catastrophes that have occurred with timing that has coincided with efforts to remove the “Promised Land” from Israel. The first ten are covered in The Israel Omen. Long ago, the ancient Hebrew Scriptures warned of cataclysms that would result from these actions against Israel.

David talked with Derek at the Prophecy Summit at Branson about the ancient warnings to those who would do harm to Israel, and discusses his belief that the four horns of Zechariah 1:18-21 are the Quartet (USA, European Union, United Nations, and Russia) that have been trying to bring peace to the Middle East since 2002.

This interview from the Prophecy Summit at Branson is one of a series that will be posted over the next few months. Upcoming guests include Tom Horn, Joseph Farah of WorldNetDaily, Chuck Missler, Russ Dizdar, Doug Woodward, Gary Stearman, Noah Hutchings of Southwest Radio Ministries, Col. Stephen Bauer, and David Brennan.

Video of these interviews will be part of a DVD set that is being produced by Prophecy in the News.

7 comments on “P.I.D. Radio at the Prophecy Summit: David Brennan”